In both of the applications that we are tailoring our synthesis to, the emitting colors blue, green and red are of high importance. The research in our group is focused on the design of blue and red TADF emitters based on purely organic molecules. By avoiding the use of costly heavy metal elements that trigger environmental concerns, we aim to develop sophisticated TADF structures that emit colorful light with high efficiency, color purity and easy synthetic access.

Organic TADF materials can harvest 100% of the electrically generated excitons as a result of their small singlet–triplet energy difference. However, maximizing EQE of a device also requires enhancing the light out-coupling efficiency. We presented a new acceptor-donor-acceptor (ADA) emitter (ICzTRZ) employing an indolocarbazole donor and diphenyltriazine acceptors that show nearly-completely horizontal orientation regardless of the host matrix, leading to a blue OLED (λEL = 483 nm, CIE coordinates of (0.17, 0.32) with an EQE of 22.1% and a maximum luminance of 7800 cd m−2.[1] 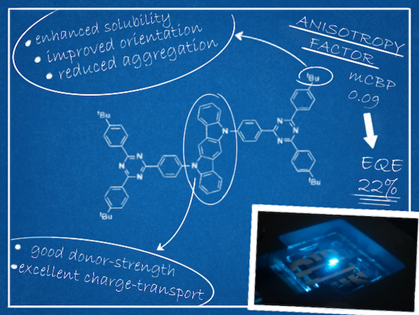 Orange-red purely organic TADF molecules hold an enormous potential as fluorophores in cellular imaging. Firstly, in this spectral region, the autofluorescence of cells is minimal or can even be neglected which leads to an improved performance of the imaging experiment. Furthermore, TADF molecules offer the advantage of displaying a delayed fluorescence component which avoids the competition with the short-lived autofluorescence. This characteristic can be used in time-resolved fluorescence imaging (TRFI). Moreover, the purely organic structures also offer the favorable trait of avoiding heavy-metal atoms, which leads to an inherently lower risk of cell-toxicity.

Therefore, the development of novel orange-red emitting TADF structures is highly desirable and largely based on polar structures or non-polar but π-conjugated molecule designs that deploy heteroatoms.

TADF Molecules based on [2.2]Paracyclophane Structures

The distance of 3.09 Å between two bent phenyl rings of [2.2]paracyclophane (PCP) is shorter than the van der Waals distance between layers of graphite (3.35 Å). Thus, the electronic communication in a single molecule can be realized smoothly via through-space charge transfer. By combining the donor and acceptor units on the different decks of PCP, we realized TADF emission with PLQY of 60% and delayed lifetime of 3.6 μs.[2] Besides using the PCP scaffold as a bridge for charge transfer, we have also extended the PCP skeleton to the donor unit carbazolophane (Czp), which possesses additional torsion, an enlarged donor volume by through-space interactions and planar chirality.[3] Using the novel TADF emitter (CzpPhTrz), sky blue OLED with EQE as high as 17% and CIE coordinates of (0.17, 0.25) were accessed. 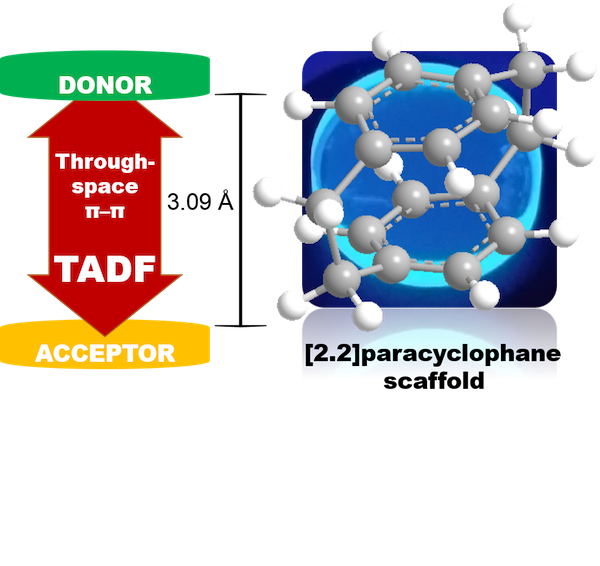 Beyond the simple donor-acceptor design, chiral emitter materials are developed to enable the emission of intrinsically circular polarized light. Therefore, planar chiral building blocks and their chiroptical properties are exploited.