Controlling the growth and properties of structures at the molecular level is one of the greatest challenges in nanotechnology. Metal-organic frameworks (MOFs) - coordination polymers consisting of organic linkers connected via metal ions - are promising systems due to their almost unlimited flexibility in design.

In addition to the properties of the network itself (electrochromic, megnatic and storage materials), MOFs can host other molecular compounds via host-guest chemistry. This increases the technological potential in a variety of different areas, especially in catalysis and hydrogen storage.

Further applications arise when MOFs are attached to surfaces. Surface-mounted metal-organic frameworks (SURMOFs) can be obtained via an innovative and efficient approach in which the surface initiates and controls the growth of the MOFs. The method is based on crystalline grown MOFs deposited on modified substrates by liquid phase epitaxy (LPE).

Figure 1: Synthesis of a SURMOF using the layer-by-layer (lbl) technique.

This working group can look back on a large number of synthesised linker molecules. These have been used by many cooperation partners for the synthesis of many porous materials and tested in diverse applications. The experience gained benefits the group in challenging syntheses of functionalised linkers.[1]

The properties of MOFs relevant to their various applications, such as storage and separation of molecules, shape-selective catalysis and molecular recognition, can be tuned and optimised using a fairly simple method. For this purpose, the so-called post-synthetic modification (PSM) is a suitable method, since the target function is introduced only after the MOF lattice has been built. Numerous studies have shown that MOFs in particular, which are built up from organic linkers with functional groups such as -NH2, -OH, -NO2 and -N3, are very suitable for PSM processes.[2]

Surface-grafted gels (SURGELs), are an interesting class of three-dimensional, highly porous, covalently linked polymer fimes that can be obtained by cross-linking the organic struts within a SURMOF (Figure 2). Since they combine the advantages of MOFs with those of covalently linked gels, they offer enormous variability in the introduction of functional groups into the network and, due to the lack of a metal ion, pronounced stability towards water.[3]

Figure 2: Postsynthetic cross-linking of linker molecules for the fabrication of SURGELs.

By linking chiral amino acid derivatives with organic linkers for MOF synthesis, we hope to create novel materials that can be used to separate mixtures of substances and in sensors. The chiral residues of the amino acids point into the pores of the network and thus have an influence on the guest molecules in the network. Due to the wide range of available natural and synthetically produced amino acids, the separation properties can be precisely adjusted. Furthermore, and chiral molecules can be added to linkage groups in order to incorporate them into networks. BINOL can be mentioned as an example here.

Our aim is to synthesise photoswitchable azobenzene-containing linker structures that can be used to produce stimuli-responsive SURMOFs (surface-anchored metal-organic frameworks). This allows the properties of membranes to be subsequently modified and, for example, the separation properties to be controlled by irradiation.

Figure 3: Presentation of SURMOF-based membranes on the basis of photoswitchable azobenzene-containing linkers.[4]

Figure 4: Schematic representation of the synthesis of SURMOFs with photocleavable linker molecules.

N-heterocyclic carbenes (NHC), among others, are often used as ligands for metals to obtain particularly stable complexes. Due to the special electronic properties of the ligands, the resulting compounds often have high activities in catalysis. The motivation of this work is to combine these catalytically active compounds with the properties of SURMOFs like crystallinity and porosity to obtain a very active and reusable catalyst system. Besides many possible reactions, the focus here is on SABRE-NMR. This is a novel method for signal amplification in nuclear magnetic resonance spectroscopy based on polarisation transfer from para-H2 to the molecule to be analysed. 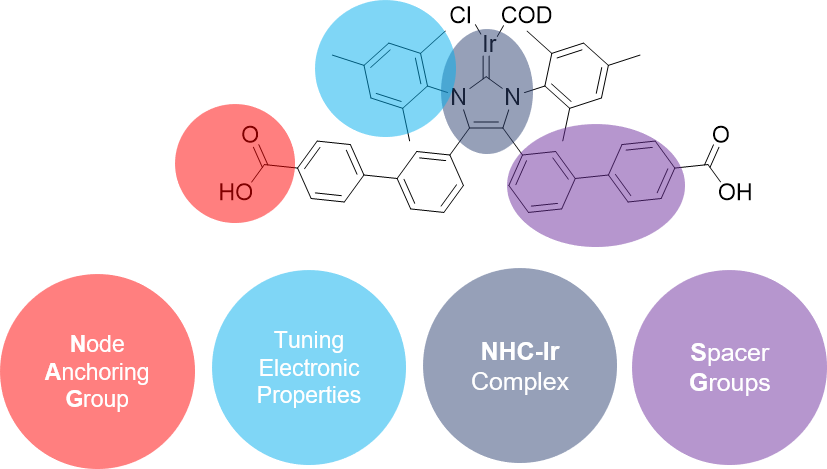 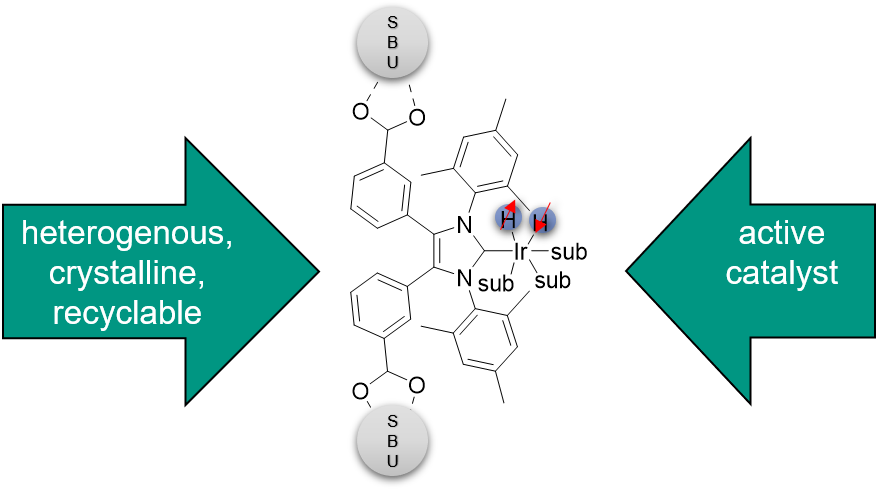 Figure 5: Structure of an NHC-functionalised linker and principle of SABRE-NMR.

NHC-Ir complexes are used for this purpose, which are incorporated into SURMOFs in this work. In this framework, novel linkers functionalised with imidazolium salts are synthesised and new NHC-based ligands for metal complexes are developed.

Due to the properties of porphyrins, such as strong light absorption, the ability to efficiently transport energy and the possibility to form metal complexes, this class of molecules has long been the focus of an application in directed networks such as MOFs. However, with a few exceptions, the porphyrins used as linkers so far mainly exhibit A4 symmetry, which means that porhyrin-based MOFs have comparatively limited modifications. The use of linear porphyrin linkers, on the other hand, allows the addition of further functional groups in the remaining meso-postions of the porphyrins. In particular, this facilitates, for example, the modification of light absorption or the representation of chrial porphyrin-based structures.

Since phthalocyanines generally absorb at higher wavelengths than porphyrins, phthalocyanine-based MOF linkers are also of great interest. The use of symmetrical phthalocyanines as MOF linkers has already been described in the literature. Our research focus is therefore now on the synthesis of trans-A2B2 phthalocyanines. Due to the challenging nature of the targeted phthalocyanines, longer synthesis routes are necessary for their preparation, with molecular design in particular also playing a crucial role in optimising product solubility.

Figure 6: Construction of a porphyrin/phthalocyanine-based linker.

Combined MOFs of porphyrin and phthalocyanine linkers can be used in photovoltaic systems because they have a very wide absorption range.